A lovely appraisal of Hyenas from Kirkus Reviews 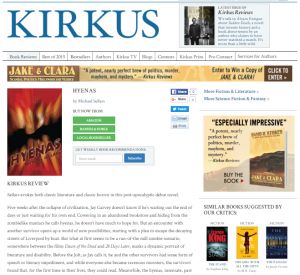 Sellars evokes both classic literature and classic horror in this post-apocalyptic debut novel.

Five weeks after the collapse of civilization, Jay Garvey doesn’t know if he’s waiting out the end of days or just waiting for his own end. Cowering in an abandoned bookstore and hiding from the zombielike maniacs he calls hyenas, he doesn’t have much to hope for. But an encounter with another survivor opens up a world of new possibilities, starting with a plan to escape the decaying streets of Liverpool by boat. But what at first seems to be a run-of-the mill zombie scenario, somewhere between the films Dawn of the Dead and 28 Days Later, masks a dynamic portrait of literature and disability. Before the Jolt, as Jay calls it, he and the other survivors had some form of speech or literacy impediment, and while everyone else became ravenous monsters, the survivors found that, for the first time in their lives, they could read.

Meanwhile, the hyenas, insensate, paw at and even eat pages from books and magazines. Unlike in a traditional zombie novel, the hyenas aren’t dead per se, but their spite and anguish call into question what life really is in the absence of words. “Language left,” the prologue reads, and there’s a powerful sadness in those words—and even in the hyenas’ ghastly, horrifying laughter—that seldom gets its due in post-apocalyptic fiction. Of course, it’s not all William Blake and Northrop Frye, and fans of the adrenaline and gore of more traditional post-apocalyptic zombie fare will find themselves right at home here. The hyenas embody a genuinely frightening take on those familiar themes, and they’re backed up by a colorful cast of characters and a host of other threats, including a Beatles-obsessed militia leader referred to as Sgt. Pepper. While the novel lacks some of the expansive, atmospheric descriptions that are a hallmark of post-apocalyptic stories, the entertaining quality of the subject matter and the depth of the underlying themes create a vivid world.

The start of an exhilarating new series and a stirring addition to the zombie canon.